When we were kids, our family packed up and moved across the country, from suburban Philadelphia to muggy and metropolitan Atlanta. Aside from the typical drama that accompanies three pre-teen girls having to start in new schools and a new neighborhood, we had no real issue with moving to Atlanta. Saying we were moving to Georgia, though, was a harder sell, conjuring up images of Deliverance and daisy dukes. 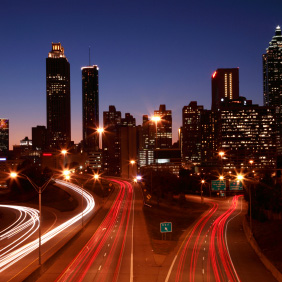 …and then there’s Georgia.

Georgia, during the last 100 years, has essentially maintained its status as a rural state with a single giant city in the middle. Georgia has lakes and mountains and a rich, unique history, but at the end of the day, without Atlanta anchoring the business and cultural heart of the entire South, the state would basically blend right into Alabama and Mississippi.

Which is not something that Georgia likes to be reminded of.

If that’s true today, it was even more the case in the 1920s. At the close of World War I, America needed to resuscitate its economy and recover some much-needed stability. The primary way this happened was by transforming an agricultural nation to an industrial one.

That was not a welcome change for farm-friendly Georgia, which was still reeling from the last major war they got involved in. (For the first, Pennsylvania-based half of our lives, we knew it as the Civil War. Now, as Georgians, we call it by it’s true name: The War of Northern Aggression. #jk)

Southern farmers saw the push toward industrialization as a threat to their livelihood. Many thought President Warren G. Harding  was hostile to agricultural interests and Southern progress.  They became a powerful voting bloc, lobbying Washington to help them get the tools they needed to compete with Northern markets.

Atlanta, though, was dealing with a different set of problems. Like a dancer fresh off the bus, Atlanta was ready to make it in the big city. Or, rather, make itself into a big city, re-establishing itself as a cultural hub on par with New York, Philadelphia and Chicago.

Atlanta was the center of Henry Grady’s “New South” — a region with diversified industry and growing capital. This whole We Are Farmers (dun-da-dun-da-dun-dun-dun!) thing wasn’t helping. Atlanta was caught in the middle of the cultural Battle Royale of the 1920s, struggling to maintain a cosmopolitan reputation alongside Northern cities while serving the needs of the rest of the state.

This could have been fertile ground for division, for partition, for more fighting – a classic rural vs. urban conflict, pitting the Daisy Dukes against the City Slickers, all set against the backdrop of Georgia red clay and poverty. Instead, it got the state a radio station.

In 1922, Detroit, Pittsburgh, and Chicago had wide-ranging radio broadcast stations; Atlanta, the foremost Southern city, did not, representing a void for the whole region. For the South, radio was important for providing citizens with entertainment and news, connecting people to culture and the hum of human life in places beyond the borders of their small town. But it was essential for farmers, who relied on the weather reports and latest crop prices to plan accordingly. Entire fortunes could be made or lost depending on having good and up-to-date information, and a three-day old newspaper that finally made it to the country store in Dooly County  wasn’t exactly going to have great insight on yesterday’s sudden rainstorm.

W.A. Wheeler, the chief of radio news service for the department of agriculture, made this point in a statement to the Atlanta Constitution:

“At this minute probably several hundred thousand people on farms and rural sections in the territory near Atlanta are reading day before yesterdays paper – not because they are not progressive and do not care to have up-to-date news, but because they are so far removed from town that it is physically impossible to deliver a newspaper to them within from twelve hours to several days. The radio instruments will correct all that, and enable the rural dweller, no matter where he is located, to keep closely informed on the world’s happenings.”

A couple other key players also got the ball rolling. James Holloman had the radio beat for The Constitution, and in an act of questionable reporter ethics, was also the guy who applied for the Constitution’s radio service. He covered his own work with little regard for journalistic restraint, writing that the building of an Atlanta broadcast plant was “the last word in improvement of this amazing invention that has probably made more rapid strides in the last few months than any of the discoveries of science.”

Georgia Representative Charles H. Brand brought a resolution to Congress on March 14, 1922, directing the USDA to launch an investigation into just how easily and quickly the federal government could supply cotton farmers with daily reports of the market prices of cotton. New York, he noted, had already begun sending two news dispatches a day via radio to farmers in the tri-state area.

So it wasn’t just about making good economic choices: it was also about proving to the world that the South was not behind, that Atlanta was just as modern and competent as cities in other regions.

WSB, the broadcast service of The Atlanta Journal, premiered its radio dispatches on March 15, 1922, “purely for the benefit and enjoyment of the public, with no commercial feature connected.” The call signal WSB, for “Welcome South, Brother,” was perfectly aimed, both establishing Atlanta as the gateway to the South, while extending a friendly handshake to the rest of the country rather than resistance or opposition. Two days later, at seven o’clock in the evening, The Constitution launched its first dispatch of news on a WGM radio broadcast, flashing market and weather reports along with news and prices from the Department of Agriculture. They also broadcasted the Arlington time signal, sent from Arlington to Atlanta to the entire Southeast, so that listeners could set their watches “and be absolutely confident that the time is correct.”

At the time, around 1,000 Atlantans had radiophones, but demand far outweighed supply. The Constitution reported that, “farmers themselves are installing receiving stations just as fast as the equipment can be bought.” The Journal went so far as to establish a radio department “for the use of everybody in Dixie,” to answer questions and concerns “and anything else that relates to the newest and most wonderful method of communication.”

Within two days WSB had aired a live New York performance by Earl Fuller and his Jazz Orchestra across the Southeast.  It was a small step in the large trajectory of radio that was to come, but for Atlanta, it was a massive step towards modernization, access to information, and legitimacy as a city.