If you asked our parents to pick which daughter they liked the least, they would struggle and ultimately demure completely, saying they love us all equally.

If you asked Jack, our dog, which of us he likes the least, it’d be an easy answer. He likes me well enough, sure, but not as much as Caroline or Corinne. TO BE FAIR, they both had full sized beds growing up, large enough to fit a human and a pupper. I had a twin bed (hmm, at least I think my parents loved us equally…) and Jack likes to cuddle. I was disadvantaged from the get-go. I was lucky to face such brutal adversity so that I could write about it in my college essays.

I’m just not as much of an animal person as others in my family. I like animals in theory, and on the internet, and as characters in books and movies. And I like them in person for short periods of time, until you have to walk them or brush their teeth.

I just don’t see the purpose that pet-ownership serves. It’s not like pets can work as bank tellers, or, I don’t know, serve in the military. 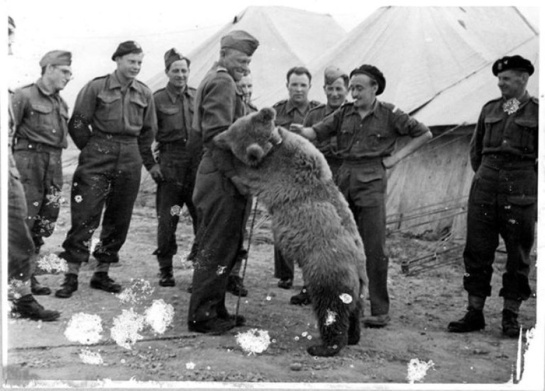 Enter: Wojtek the bear, who served in the Polish army in World War II. When the Polish Army was wandering around Iran in 1943, they found a lil brown bear cub and trained it to carry ammunition. When they moved to the European front, the only way to bring Wojtek along was to enlist him in the army.

So rather than saying “LOL can you imagine???” and leaving the bear in the care of the forest, they actually enlisted him in the army. He was given a paybook, rank and serial number, like any soldier.

He even helped the Polish forces break the German defense at Monte Cassino.

According to The Soldier Bear, a website documenting Wojtek’s role in the war:

“During the conflict, Wojtek found himself at the artillery firing line where he was seen to move crates of ammunition close to a truck where he was chained … Always inquisitive and willing to copy what the soldiers were doing, he began picking up the crates and moving towards the cannons.”

You know, just your typical dog-like bear that drinks beer like any man. Wojtek was also definitely addicted to tobacco, which is why he was so docile and willing to follow the troops around Europe.

When the war ended and the battalion demobilized, the soldiers returned to Poland. Wojtek was admitted to the Edinburgh Zoo in Scotland, where he lived out the rest of his days. Until his death in 1963, Wojtek would respond to the Polish language, often motioning for a cigarette to anyone speaking Polish.

There’s a movement to get a Wojtek statue erected, and there is already a children’s book in his honor. Plus, Wojtek has earned the highest accolade of all: my respect.

In the name of Wojtek, I will spend the rest of this day watching videos of Afghanistan veterans reuniting with their bomb-sniffing dogs here in the U.S. And maybe Doctor Doolittle 1-3, but only for Raven Symone’s role. And then just a quiiiick google of “puppies and kittens gifs” to see what the internet shakes out. In the morning, I’ll stop by the shelter and pet a few woofers. Maybe take one home, see how it feels. Become dependent on each other emotionally. Grow old together. Maybe he’ll heroically call 911 with his cute little paws when I enter a diabetic coma at age 45 (I eat a lot of Sour Patch Kids.) We’ll both go on Ellen to talk about who really saved who. We’ll co-write a book together that’s one part Marley and Me, one part The Bourne Trilogy. Then, when we pass together into the great beyond, paw holding hand, they’ll erect a statue in our honor, a statue bigger than Wojtek’s.

Or not. Like I said, I’m not really an animal person.