When the clock struck midnight on December 31, 1999, I was eight years old. I was likely exhausted (MIDNIGHT?) but I can still remember how cool that moment was: the dawning of a new millennium. Not a new year. Not a new century. A new millennium. No one else will get to say that they lived through a new millennium for the next thousand years. And I won’t even care then! I’ll be long dead!

To celebrate this big moment in history, our Grade-A parents let us throw a Millennium Party a few days before the real New Year. (New Years is for adults. December 29 is for kids. Rules are rules.) We made time capsules, stuffed with magazine clippings, late ‘90s memorabilia and letters to the future.

I have no idea what happened to those time capsules. Maybe we buried them in the yard? (And then moved away.) Maybe my parents threw them out. Maybe one day we’ll find them in the storage unit my dad says he doesn’t have because he definitely sold all of those books my mom told him to sell. (Requests for comment from both parental parties about the whereabouts of the time capsules were not immediately returned.)

Maybe, just maybe, someone decades from now will lift a floorboard in our old house and see three tennis ball cans, spray-painted silver and stuffed with magazine cut-outs of Nick Lachey. The anticipation is killing me.

Which is probably exactly what Paul Revere and Sam Adams thought when they stuck a time capsule in the cornerstone of the Massachusetts Statehouse in 1795.

When the capitol was being built, Adams was the governor of the commonwealth. He and Revere took a small bag made of animal hide, filled it with coins, a copper medal of General George Washington and copies of some of the earliest records from the founding of the colony in the 1600s. They tucked it into the cornerstone along with a metal plate bearing their names and the date, and then sealed it in and allowed the statehouse to be built around it.

Then, less than 30 years after both men died, workers building a new wing of the capitol building found the time capsule. In 1855, Massachusetts residents retrieved the hide bag, examined the contents and then did the most selfless thing anyone could ever do: they put it back.

Governor Winslow Harley replaced the decaying bag with a brass box and added newspapers and coins of the day. Then, he ceremoniously returned it to the cornerstone, sealed it up and walked away.

It took conservators from the Boston Museum of Fine Arts seven hours to safely remove the box from the cornerstone. They x-rayed the contents and then, in a press conference, removed the historical artifacts one by one. 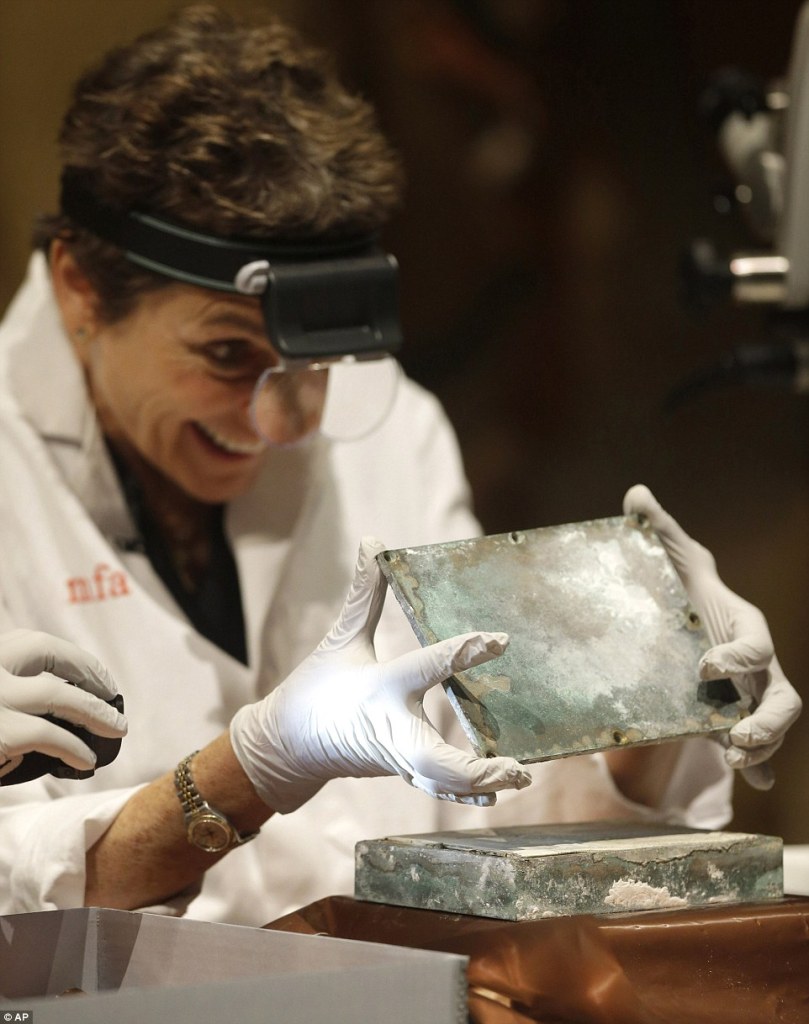 Real-life glee from a 21st-Century Person uncovering a time capsule.

Let’s take a moment to appreciate the history in that box. Revere and Adams put the original bag there less than 20 years after they helped to win independence from the British Empire. American Democracy was so new then, they had no reason to believe that the building they constructed — a monument to freedom, self-governance and united, sovereign states — would still be standing by the 1850s, let alone into the next millennium.

These men risked, life, liberty and the pursuit of happiness to achieve all three for generations to come. I can almost imagine the mix of pride and apprehension they must have felt burying that time capsule. At such an uncertain time, it would be hard to know what would be happening next year, let alone centuries into the future.

But today, the statehouse is still “for the use of the legislative and executive branches of the government of the Commonwealth of Massachusetts,” as Adams had inscribed on a plate in the capsule. We are still an independent nation. We still have the peaceful transfer of power every four or eight years. Government of the people, for the people, by the people.

In honor of the brave work of our forefathers, the state of Massachusetts did the most selfless thing they could do: they put the capsule on display at the MFA…and then reburied it.

In June, the contents were placed in a stainless steel box filled with argon gas to prevent oxidation, along with a set of 2015 U.S. mint coins. With all the pomp and circumstance of a 1795 ceremony — fifes fifing, drums drumming, masons marching and Clydesdales carrying the capsule through the streets — the box was placed in the cornerstone and resealed.

If you’ll allow me to editorialize for a moment, things can feel a little uncertain these days. It’s easy to feel like many of the ideals we hold so dear as a country are starting to crumble away. Who knows what will happen in four years, eight years, fifty years? Will the Massachusetts Statehouse still be standing? Will the country?

I don’t know. But I’d like to believe that 150 years from now, a water main will break in Boston and the robots we’ve programmed to fix all of our problems will be sentient enough to feel something when they see that stainless steel box in the cornerstone. I’d like to think that they’ll laugh at our fears and be cheered by our hope and then doing the most selfless thing a robot can do: rebury the thing.