If you are a woman who sometimes speaks up in group settings, especially when men are present, you will, at least once in your life, get a card/magnet/keychain warning you that “Well-behaved women seldom make history.”

It’s a saying often attributed to Marilyn Monroe, someone who did augment her existing fame through bad behavior, sordid relationships and being found in the wrong place at the right time.

Pinterest also tells me people think Anne Boleyn said it. I’m not sure someone cut down right in their prime would go around bragging about making history. Things took a turn real quick for Queen Anne, so unless she said it on coronation day, not bloody likely. (All beheading puns intended.) 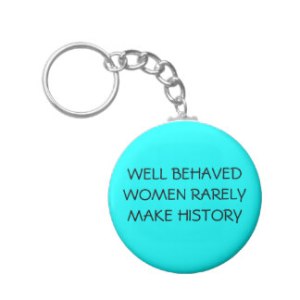 Ironically, the phrase was actually coined by a well-behaved female historian you’ve likely never heard of. Laurel Thatcher Ulrich is a professor of American History at Harvard University. She’s a Mormon, which is why I assume she’s well-behaved. And she coined the phrase in 1976 while writing an undergraduate paper called “Vertuous Women Found: New England Ministerial Literature, 1668-1735.”

Seriously. Here’s the excerpt where this now-cliched phrase first emerged:

They prayed secretly, read the Bible through at least once a year, and went to hear the minister preach even when it snowed. Hoping for an eternal crown, they never asked to be remembered on earth. And they haven’t been. Well-behaved women seldom make history; against Antinomians and witches, these pious matrons have had little chance at all.

Ulrich’s writing doesn’t seem to applaud this idea, that well-behaved women seldom make history. She seems to be saying that many great stories and good people have been lost to us, simply because they weren’t noisy enough to show up in a history book. In fact, Ulrich’s primary area of study is interesting women who have been forgotten; her most famous work profiles Revolutionary-era midwife Martha Ballard.

Heard of her? Probably not. Unless you read Ulrich’s book, which won the Pulitzer Prize. Or watched the PBS documentary based on the book, which Ulrich helped write and narrated. Maybe this is a bad example because, clearly, Martha Ballard had her day in the sun.

But what about all the other Revolutionary-era midwives out there? They were earning mad ducat for their families, doing a job no man could do, and, lest we forget, delivering the first generation of non-colonized Americans ever. I guess they were too busy hustling to make it into our history books.

And maybe that’s okay. Everyone knows that one person who is clearly in it — whatever it is — for the fame. And they’ll follow that keychain’s advice to the letter, making enough noise to earn a spot in the history books. That’s so great for them.

But while Betsy Ross was in Philadelphia, sewing up both a flag and her role in kindergarten performances of Revolutionary War history, Martha Ballard was in rural Maine, bringing life into the world.

And when you’re biting that piece of leather and pushing a seven pound eggplant out of your body, sans medication, who would you rather have by your side?

The more women’s stories we have recorded for posterity, the better. I’m not knocking the women that did earn their place in history, particularly those that fought and even died for important causes. But every time you think of them, give a little nod to the forgotten sheroes, the ladies, well-behaved or otherwise, that fought their own fights, lived their own lives, and set the course of history in their own small ways.

Like Laurel Thatcher Ulrich. But don’t worry about her. She capitalized on this fame and wrote a book called, what else, Well-Behaved Women Seldom Make History. It’s now the first thing that comes up when you google the phrase.