Compared to life in 2016, being a Puritan objectively sucked. A lot. Yes, you got to live out your religious ideals, but you had to do so in frigid New England where it gets dark at 4pm in the winter and where half the people you knew would be dead within a year or so, due to one of a variety of grim reapers knocking on your door at all hours of the day and night. Also, you couldn’t complain because it would appear to be evidence that you were damned by God and definitely not one of the chosen ones. Ugh. No gracias. Complaining is the only thing that got me through this long Boston winter.

While daily life was Tough Times™ for these early religious warriors, it was undoubtedly worse for the women — who had limited education, little independence and were expected to bear 10 or so children, many of whom would not live to adulthood. But my close-watching of Sister Wives and the Kardashians has revealed to me that nothing creates stronger bonds of #femalefriendship than being surrounded by Tough Times™ and a Culture of Oppression. Kim, Kourtney and Khloe are ten times closer because of the horrible men they have dated, and don’t even get me started on Kody Brown — he would have loved to be a Puritan. Minus the monogamy.

Knowing this, I am intrigued by what I recently saw at Boston’s famous King’s Chapel Cemetery. A plaque there highlights the graves of three successful “She-Merchants,” women who ran their own shops: Sarah Todd, Ann Dearden and Alice Quick.

Upon their deaths in 1771 and 1777, Todd and Dearden left their significant estates to other women – their besties or mentees or girl gang affiliates. I am moved by this, but also curious: was this common, or even accepted, for women to accumulate wealth and then pass it on to a gal pal rather than a spouse or family member? Even today, legal processes like wills and power of attorney tend to be narrowly focused on the two wearing wedding rings, and ignore the third party with one-half of a Best Friend necklace dangling around her neck. 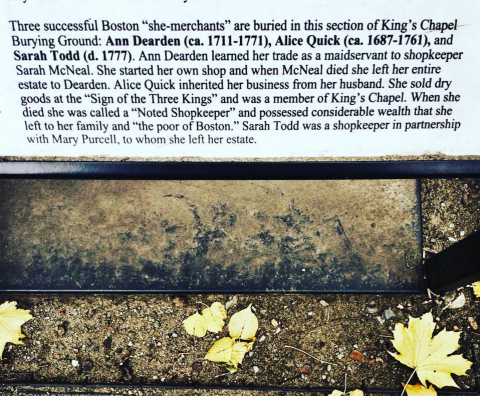 One answer might lie in the story of an early American shero, Elizabeth Murray Campbell Smith, who accumulated all of those names through marrying thrice over, who opened her own shop in Boston at age 23 and who was a real tough cookie in personal and professional negotiations.

Born in Scotland, orphaned at age 11, Murray Campbell Smith crossed the Atlantic by herself in 1748 and opened a shop in Boston against the backdrop of the burgeoning American Revolution. She went back and forth to England to buy supplies and learn bookkeeping, and she refused to sell any goods on credit. John Singleton Copley even painted her portrait, which now hangs in the MFA in Boston.

Murray Campbell Smith demanded pre-nups from all three of her husbands, an extremely rare move in an age where marriage meant that your husband absorbed all of your assets. Earning money, and keeping it for herself, gave her a degree of freedom that other women of her time would not have had — an early incarnation of a “Fuck Off Fund.” Further, she negotiated to receive a settlement when her husband Smith died, adding to her capital. She wrote to a friend two months after his death that “I am finally able to live as I please,” making us all highly suspicious but truly impressed.

Anyway, she was certainly getting paper. But more importantly, Murray was intent on helping other women to do the same. Murray was #squadgoals. Murray was #bosombuddies. She brought her three nieces to America to start them in business, worried they would stay in London too long and become “fine ladies” instead of boss ladies. She wrote a will giving all her assets to other women. She befriended Anne and Elizabeth Cummings, two other local she-merchants, “industrious Girls who ware Striving in an honest way to Git their Bread.” She was a real Women and Women First kinda gal.

Eleanor recently wrote about Martha Ballard and other Revolution-era ladies who “earned mad ducat” as midwives, and I have respect for that. I think Murray Campbell Smith would have as well. They were hustling.

But there’s something especially bold about building a business from scratch, working in a traditionally male domain, keeping your hard-earned cash out of the hands of overly entitled husbands, fathers and brothers, and using it to help other women achieve financial independence and a career — even going so far as to leave another woman your estate— all while living in the restricted era of Puritanism.

No doubt, I’d want Elizabeth Murray Campbell Smith in my Girl Gang even today. She’d probably cut a tough contract though. She’s about her business.