Let’s just get this out there at the beginning: I’m not named for Eleanor Roosevelt. Nor am I named for Eleanor Rigby, and singing that to me off-key isn’t as original as you think, Tinder. I’m named for my great-aunt Eleanor, who was neither the subject of a Beatles song nor a famous rumored lesbian.

But Eleanor Roosevelt has long been a role model for me, mostly because people insist on giving me notebooks with her quotes on the front. The future belongs to those who believe in the beauty of cliche gifts, amirite?

Also, though, because she was an inspiring global leader and shero who put many meaningful cracks in the glass ceiling. She was the longest serving First Lady in U.S. history, co-running the country with her husband (and fifth cousin) Franklin Delano Roosevelt. She served as ambassador to the United Nations. And she was outspoken on both women’s rights and racial politics. She was an intersectional feminist before it was cool. (So, not yet.)

Eleanor Roosevelt was also rocking the cool I-woke-up-like-this Jennifer Lawrence vibe before anyone else. She was the spawn of two of the most powerful families in the world, her uncle was Teddy Roosevelt and she was smarter than almost anyone in her day. But she wasn’t going to brag about it.

Here’s a great example: in 1939, singer Marian Anderson was taking the world by storm. She performed across Europe and was lauded as the greatest contralto of her time. As an American, she hoped to perform in her home country, for her people. But the Daughters of the American Revolution prohibited her from using Constitution Hall for a concert.

Anderson was black, and wanted to perform for an integrated audience. Besides the fact that the DAR was hugely racist in general and had banned black performers in 1932, there were serious logistical concerns. Constitution Hall didn’t have a bathroom designated for non-whites. And DC law required segregated bathrooms if blacks and whites were going to attend. What a conundrum!

Eleanor Roosevelt heard about this and reached out to the DAR, a group of which she was a member…at least until the end of this letter, which is COLD. AS. ICE.

I am afraid that I have never been a very useful member of the Daughters of the American Revolution, so I know it will make very little difference to you whether I resign, or whether I continue to be a member of your organization.

[Reading between the lines a bit: Just little old me resigning, no one will notice you lost the FIRST LADY OF THE FREAKIN COUNTRY over this, right?]

However, I am in complete disagreement with the attitude taken in refusing Constitution Hall to a great artist. You have set an example which seems to me unfortunate, and I feel obliged to send in to you my resignation. You had an opportunity to lead in an enlightened way and it seems to me that your organization has failed.

[We did NOT throw off the shackles of Mother England for this.]

I realize that many people will not agree with me, but feeling as I do this seems to me the only proper procedure to follow.

[Wait and see how many people agree with me on this, you revolutionary snobs.]

[One Badass Bitch Out of Hell.] 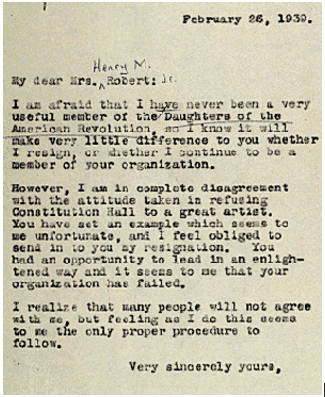 And then Eleanor and Franklin Roosevelt invited Marian Anderson to sing on the steps of the Lincoln Memorial on Easter Sunday. The free recital drew a crowd of 75,000 people and you better believe those port-a-potties were integrated. (I cannot confirm the toilet situation. There are simply not enough toilet historians.) The radio broadcast reached millions. And boy did she sing:

Eleanor Roosevelt was not the only DAR member to resign over this — thousands of others stepped away from the organization as well. But likely none of them did it with as much sass, class and access to the Lincoln Memorial as E.R.

She wrote (in virtually illegible scrawl):

Your letter of resignation reaches me in Colorado upon my return from the far West. I greatly regret that you found this action necessary. Our society is engaged in the education for citizenship and the humanitarian service in which I’ve know you to be vitally interested.

I am indeed sorry not to have been in Washington at this time. Perhaps I might have been able to remove some of the misunderstanding and to have presented to you personally the attitude of the society.

I’m going to go out on a limb here and say that never has anyone been happier to be in the Far West at that moment than Mrs. Henry M. Roberts Jr. Because if that’s the letter that Eleanor Roosevelt wrote, I’m sure the in-person show would have been twice as withering.

So, no, I am not named for Eleanor Roosevelt. And that’s a damn shame. Because she was a powerful political giant who fought for the rights of the disenfranchised and undervalued members of our society. Next time someone starts singing Eleanor Rigby to me at a bar, they’re all getting treated to a lecture on Ms. Roosevelt, Marian Anderson, Mrs. Henry M. Roberts Jr., and intersectional feminism. Sorry to be that girl, but, well, it comes with the name.