Today is St. Patrick’s Day, a holiday that has blackout-stumbled away from its origins as a Christian feast day during the typically restrictive Lenten season into a more raucous, leprechaun-filled affair that marks the kickoff to spring.

We figure you’re drinking today, or tomorrow, or this weekend. But rather than mar your green, shamrocked celebrations with the dark life story of Patrick himself, why not shed some historical light upon another chapter of our alcoholic past?

Since it is women’s history month, allow me to introduce some sheroes among us: the brave, confident and economically opportunistic women bootleggers of 1920s America.

When alcohol was outlawed in 1920, women more often than men stepped up to (literally) serve. Women could hide bottles and flasks on their person with less risk of being body-searched, and they were less likely to be accused of breaking the law. In this era, women were expected to maintain the home and raise children while cultivating high moral character — an oppressive existence in most cases, but one that allowed them to buy and sell liquor on the hush-hush, since they were seen as *prim* and *proper.* Imagine accusing a grandmother of bootlegging! …but grannies were hustling.

Some of these women were roped into the biz by male bootleggers, which I am sure involved some coercion and was not always a picnic for the women. Some were in it because it was good money with little risk; even when caught, the sentences for women tended to be light.

Many of these women already took in laundry for extra cash, and adding a new revenue stream due to the demand for alcohol meant their children often helped out with both businesses. All over the country, female-run liquor businesses quietly cropped up in homes and backyards, some small-scale and some rivaling an empire. Says Fred Minnick, the author of Whisky Women, “Anytime a woman was arrested for bootlegging and enjoyed a nice living, the press hailed the woman as Queen of the Bootleggers. In my research… I found a dozen women who were called Queen of the Bootleggers.”

Let’s meet some of these queens. Click into our StoryMap to explore. 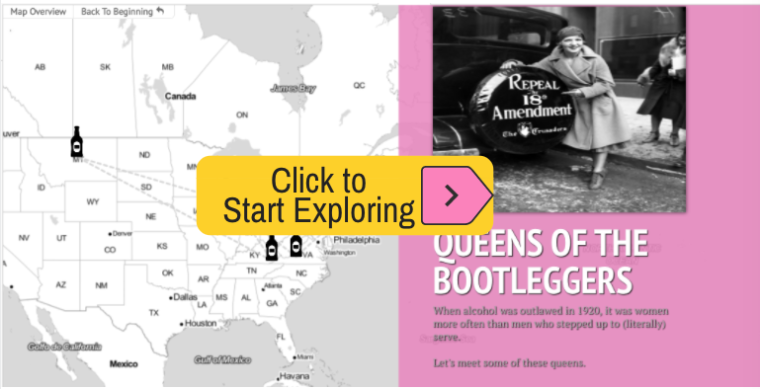