When I moved back to D.C. for my sophomore year of college, our saint of a mother took me and Caroline (also a D.C. college student) to Target to stock up for the year ahead. This was a mistake for many reasons — driving across the city is a headache, the Target in Columbia Heights is always a wreck and college move-in weekend in D.C. is a nightmare.

We probably would have waited in line with a cart full of cleaning supplies for hours, except we never made it inside. As we were pulling into the parking garage, the ground began to shake. The Great Washington D.C. Earthquake of 2011 was upon us. 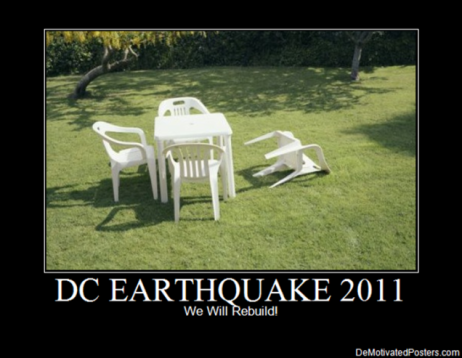 Luckily, we all survived, but wisely decided to skip Target. (This later led to a Metro adventure starring myself, my roommate Andrea and an oversized pink shag rug, but that’s a story for another time.)

The point is, moving tens of thousands of students into a city all at once isn’t a great idea. In fact, it’s a recipe for (natural) disaster.

But in many cities, it used to be way worse than just college students. They used to make everyone in the whole city move on the same day.

In New York City, up until World War II, all landlords were required to notify their tenants by February 1st, Rent Day, what the rent would be for the next year.
Then, at 9am on May 1st, all leases across the city expired at once. Unless you had renewed for another year, you had to join the droves of cityfolk who were renting carts and carriages to transport their lives to a new home.

Davy Crockett, whose rural pioneer opinion you would surely want on this tradition, wrote in 1834:

“It seemed to me that the city was flying before some awful calamity. ‘Why,’ said I, ‘Colonel, what under heaven is the matter? Everyone appears to be pitching out their furniture, and packing it off.’ He laughed, and said this was the general ‘moving day.’ It would take a good deal to get me out of my log-house; but here, I understand, many persons “move” every year.”

They didn’t just move every year. They moved every year, all at once.

New York City wasn’t alone in this. The entire Canadian province of Quebec used May 1st as Moving Day as well, based on the tradition that landowners couldn’t evict farmer-tenants before the snows had melted (that’s only humane.) But as time passed, Quebec realized that the tradition was outdated and unnecessary.

Because July 1st just made so much more sense. July 1st is Canada Day, so you wouldn’t have to take a day off of work to move, and the wee ones wouldn’t have to move before the school year is out. Imagine being forced to use the Fourth of July to move. Imagine that. Imagine it.

It worked out okay in Quebec, which isn’t so hot to trot on the whole Canadian nationalism thing. But it’s still a headache: moving companies rent out their vans more than six months in advance, leaving a lot of people with nothing but their car (or, god forbid, bike.) And though Quebec no longer regulates when leases begin and end, tradition is strong: about 130,000 Montreal tenants moved on July 1, 2016, according to the Montreal Gazette.

In Boston, moving day is still very much a thing. September 1st has been coined “Allston Christmas” for all the free stuff that piles up in the renter-friendly Boston neighborhood. But the Boston Globe says it’s not limited to Allston: “Call it Brighton Christmas, Fenway Christmas, Back Bay Christmas — whatever. Any neighborhood near a major university or with a large number of young renters will celebrate the occasion.”

Many leases in Boston are on a September to September schedule, but the reason is less historical than what you might find in New York or Quebec. It’s because of all those students going to Hahvahd and Northeastahn and Emehson, or any of the 22 other universities in the city. Over 200,000 students go to college in Boston, and the rental market has moved to accommodate them over the yeahs.

It might not be enough to get Davy Crockett out of his log-house, but for those of us who are students, economic migrants or just have a bad relocation habit, at least we can be grateful that most locales don’t dictate that everyone moves in and out on the same day. And that earthquakes, no matter how small, are a rarity.