Soooo. Monuments, right? Hot topic right now! Did you think we wouldn’t go there? Too soon?

With Confederate shrines coming down, and everyone up in arms about what we shouldn’t commemorate, I’m left wondering what – or who– does deserve a monument. There’s a huge amount of memorials out there, an American obsession that historian Erika Doss calls “memorial mania” – representing “heightened anxieties about who and what should be remembered in America.”

Not to be one, but like, if there’s sooo many memorials out there, why are there so few statues of women?

I’d hardly bring it up, and I hate to be a bother, it’s just, you know, we are half the population…incubators of the human race…all the nuns AND all the Victoria’s Secret models in the world… and 100 percent of Beyoncé.

Surely out there, somewhere, is a lady worth commemorating with a statue.

Seeing how things are going, it’s probably not going to become a common practice in America any time soon. In the meantime, though, Canada is holding down the fort – five times over.

Even though they’re called the “Famous Five” in the Great White North, I’m sure you have no idea who they are because they’re Canadian, AND women, AND there’s five of them, AND no, it’s not the Spice Girls. And no, it’s not the English children’s literature series of the same name.

Allow me to introduce you to your new best friends!

The Famous Five was a squad of powerful, take-no-shit, politically active ladies living in Alberta in the early 20th century. Even before the court case that made them famous, they were no slouches, shattering glass ceilings left and right (you can imagine my italicized commentary below as that of a hip-hop hype man):

And together, they were movers and shakers. Now, they were not in agreement with each other all the time, and in fact you, here in 2017, might strongly disagree with some of their stances on immigration, eugenics, and alcohol and drug legislation (what a sentence). But one thing they were sure of is that women needed to have more of a say in policy, regardless of what that say might say.
But despite being five brilliant and politically-minded people, there was one thing they couldn’t figure out for themselves. And you know women: nag nag nag. They took it all the way to the Supreme Court to get an answer.

The question: “Does the word ‘persons’ in Section 24 of the British North America Act, 1867, include female persons?”

In case you’re not up-to-date on your Canadian legislation, Section 24 refers to who can run for Senate. And, spoiler alert, the Supreme Court ruled that “persons” does not include women. Flattering!

Women could serve in the Canadian House of Commons, arguably a much more powerful role when it came to actually changing legislation, as of 1921, but the Supreme Court was evidently a stickler about the Senate. Perhaps it was the wording, and considering females to be persons was just too radical to even consider.

The Famous Five challenged the court, and got the Brits involved. That’s right; this was now an issue of the Commonwealth. Two years later the judgment was overturned by the British Judicial Committee of the Privy Council, and women were allowed to become Senators (also, people!) Nellie wrote a biting newspaper editorial titled “Now That We Are Persons.” The whole thing is worth reading, but I’ll just note this 2017-relevant part:

“All that a decree can do for us has been done. But let no one think that a miracle has happened, and that sex-prejudice will flee away like morning mists at sunrise. Prejudice dies hard, as well we know, and when belief runs back to antiquity, a ruling of civic the Privy Council cannot dislodge it.”

Go Nelllllls! Her name is Nellie and she know what she got! (What do she got?) She got a team that’s hotter than hot! (How hot is hot?) Voting rights and senate seats too! (Uh huh uh huh) We’re gonna make a statue out of you! 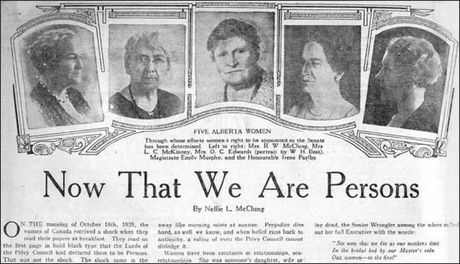 80 years later the Famous Five were named “honorary senators” and got a whole bunch of statues erected of them. Which is pretty impressive, because they were a package deal, and five is just a lot of statues to produce and mount… and yet, some might say, it’s still too few. As Ruth Bader Ginsburg, another pioneering female lawmaker, has said: “I’m asked when there will be enough women on the Supreme Court, and I say ‘when there are nine.’ People are shocked. But there’s been nine men, and nobody’s ever raised a question about that.”

Here’s the Famous Five in all their immortalized glory on Parliament Hill in Ottawa, Canada: